ussian Deputy Foreign Minister Sergey Ryabkov staunchly defended Pakistan’s “sovereign right to take care of its security” amidst South Asia’s tit-for-tat missile tests, with this unprecedented statement not only signifying the strength of the Russian-Pakistani Strategic Partnership, but also potentially being a response to the Indian Ambassador to the US’ recent hint that his country will prioritize the undertaking of an anti-Russian military pivot towards the Pentagon during Modi’s second term in office. 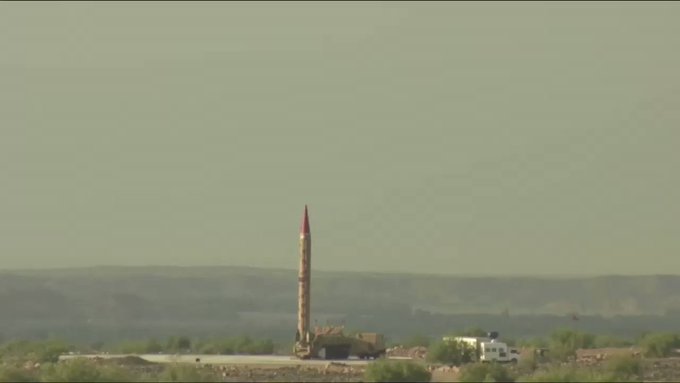 21.5K people are talking about this

Tit-for-tat missile tests aren’t really a new trend anywhere in the world, but the latest ones in South Asia have captured the world’s attention because of the tense context in which they’re occurring. Pakistan recently gave India a “bloody nose” a few months ago in February after Modi’s military misadventure ended in failure following the downing of at least one of his country’s warplanes, which in turn prompted the incumbent premier to make anti-Pakistani hostility one of the main platforms of his re-election campaign. He ended up winning handsomely, but Pakistan sent him the message that he shouldn’t think about carrying through on his campaign rhetoric when it tested a new nuclear-capable missile on the same day that Modi declared victory.

Unaware observers might have predicted that Russia would condemn Pakistan for “saber-rattling” against Moscow’s Soviet-era ally, but the exact opposite actually occurred when Russian Deputy Foreign Minister Sergey Ryabkov staunched defended Pakistan’s “sovereign right to take care of its security”. This stance shouldn’t be surprising to those who have been following Russia’s “Return to South Asia” and realized that the global pivot state of Pakistan is intended to form its main component, which isn’t for an arbitrary reason either but is a direct “balancing” response to India’s pro-American pivot through the so-called “Indo-Pacific” concept that Foreign Ministry Lavrov earlier decried as an “artificially imposed” plot to “contain” China.

That said, Russia’s multibillion-dollar arms deals with India greatly contribute to the national budget and have become all the more important during the last five years of surviving under increasingly strict sanctions. It’s actually because of the looming threat of CAATSA sanctions, however, that India might abandon its S-400 deal with Russia and replace its much-needed anti-air systems with American THAADs instead, especially judging by what the Indian Ambassador to the US just hinted on the day of Modi’s re-election. He made it clear that India intends to prioritize the undertaking of an anti-Russian military pivot towards the Pentagon during Modi’s second term in office by replacing even more of its Moscow-provided arsenal with Washington’s wares.

If executed rapidly enough and in parallel with the US’ ever-tightening sanctions regime, this could cripple the Kremlin’s socio-economic development plans that are supposed to coincidentally be implemented during this exact same timeframe and therefore make it much more likely that Russia will be forced to make the many “concessions” that the US demands of it in exchange for a “New Detente“. Russia realizes the game that the US and India are playing and that’s why it’s been steadily diversifying its military partners over the past couple of years ever since it became evident that the Indo-American alliance is to its strategic detriment, which relevantly culminated in turning its rapidly accelerated rapprochement with Pakistan into a strategic partnership.

Although the Pakistani arms market is by no means comparable to India’s and could never replace the revenue that Russia stands to lose from the latter, its importance derives from how it figures into Moscow’s strategic calculus. Russia’s 21st-century grand strategy is to become the supreme “balancing” force in Afro-Eurasia, to which end it’s inclined to militarily tilt towards Pakistan the more than India pivots towards the US. The recent tensions in South Asia also revealed that India, not Pakistan, is the real rogue state, which has been proven even more by the regionally destabilizing effect that its pro-American pivot is having, so it makes sense why Russia would side with the most responsible state in the region, Pakistan.

From Russia’s perspective, Pakistan is entirely in the right to test a new state-of-the-art nuclear-capable missile on the same day as Modi declared victory because it wasn’t Islamabad that almost brought the region to the brink of nuclear war earlier this year but New Delhi. There’s a high likelihood that India’s alliance with America will see it continuing to behave aggressively as the US cheers it on in order to justify more arms sales to the world’s second-largest customer, which would undoubtedly disrupt the regional balance of power. In response, Russia would naturally consider selling its own wares to Pakistan in order to restore the aforementioned balance that the US and India disrupted, as signaled by its support for Islamabad’s tit-for-tat missile tests.

DISCLAIMER: The author writes for this publication in a private capacity which is unrepresentative of anyone or any organization except for his own personal views. Nothing written by the author should ever be conflated with the editorial views or official positions of any other media outlet or institution.

What’s India After In Afghanistan?

The Political Consequences Of The Pulwama Attack

The Peace Deal Proves That South Sudan Is A Failed Concept